As a photographer travelling the world my constant companion, the moon, never fails to fascinate me. This faithful follower is always the same, yet somehow new and different in every culture. In Bangkok, one of my favourite photographic destinations in the world, you can participate in an ancient Thai festival in honour of the moon. 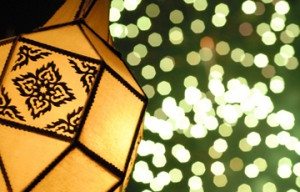 Every autumn as the monsoon season subsides, Thailand bursts into celebration with the coming of the 12th full moon of the lunar year. Loy Krathong is this country’s centuries old floating tribute to our bright and shining natural satellite; and without a doubt, Bangkok’s five star Mandarin Oriental Hotel is a privileged location to witness the million floating baskets that illuminate the Choa Phraya River this night.

Locals believe their tributes will bring them good fortune. In reality, we owe more to the moon than just regular ocean tides. Believe it or not, without the moon our planet would have shorter days, stronger winds and radically different flora and fauna. Without the moon we may not even have evolved to our present state. 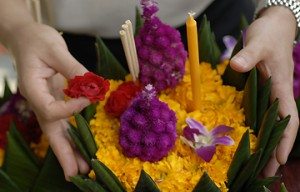 This year, 2014 Loy Krathong is celebrated on the 7th of November, a perfect month with gentle breezes cooling the air and dispersing the aromatic fragrances of frangipanis, orchids and lemon grass along the riverbanks. This is the time to relish those balmy Asian nights. The Thai word Loy means “to float” and a Krathong is a “leaf cup”, making this the “Floating Leaf Cup” festival. The “leaf cups” are exquisitely crafted with a base of lush green hand woven banana leaves and then filled with exotic flowers, candles, incense and often a small coin for luck. In recent times this small coin has been discouraged, as small children were jumping into the fast flowing, river to try and retrieve the coins. Krathongs can be bought just before the festival in markets, street stalls and flower shops throughout the city.

At the five star legendary Hotel Mandarin Oriental in Bangkok, with its privileged position on the banks of the Chao Phraya River, a team of over 500 staff is dedicated to the preparation of this unforgettable event. Spectacular little Krathong floaters are carefully prepared in house, so that each and every guest has an individual work of art ready to greet the moon on the big night. 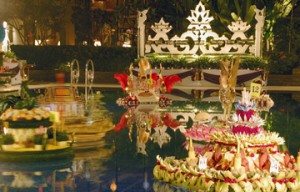 The annual Krathong contest at the Mandarin Oriental Hotel heightens the excitement as this most special night of the year nears. According to the competition rules, staff members are eligible to create the most elaborate Krathong and compete for one of the hotel’s coveted awards. The beautiful entries are displayed as floating masterpieces on the Oriental’s illuminated pool for all to enjoy during the evening celebrations. There are some incredible designs all of which have been handcrafted with great love and care; it’s well worth booking into the hotel, just for the private viewing of the in-house Krathong. I was lucky enough to join the Loy Krathong festival at the Mandarin Oriental. As the sun goes down the celebrations commence, with welcome cocktails, elegant traditional fingernail dancing, delightful music, displays of Thai classical dancing and beauty contests. 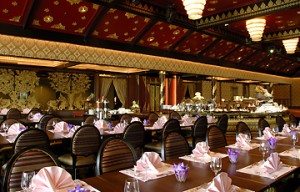 All this and fine dining, with specially created menus at all of the hotel’s restaurants, including the Terrace Rim Naan on the opposite side of the river. The hotel’s very own elaborate teak boats are on hand to transport guests to this delightful dining venue. Around the pool there is an exquisite buffet with ice sculptures and cascading seafood, and a superb collection of succulent delights carefully prepared by Executive chef Norbert Kostner and his team.

Along the river there is a constant procession of elaborately decorated illuminated boats passing by, there are sound and lighting shows and the skies are temporarily painted with magnificent firework displays. However, the highlight of the festival is floating your very own Krathong and this could involve an element of surprise. As an elegant young female member of staff told me, “If a man asks to float his Krathong with you, there can be more to it than meets the eye”. This confirms an old Thai proverb: “When a boy and girl float a Krathong together, they will be lovers in this life or the next”. It has also been said that if two lovers set a Krathong adrift and it stays afloat until out of sight, their love will last forever. There is even a Loy Krathong song, which you can enjoy here: http://www.youtube.com/watch?v=3gCNmZYSaXU

Just like anything there is an art to floating your Krathong. First of all those delightful breezes have a mischievous habit of blowing out your candles, so once lit, the candles should be guarded by your hands from the breeze. The Krathong must be placed very gently and evenly onto the water to avoid sinking. The Oriental has developed an instrument to aid this process: a bamboo pole with a wire netting that carefully balances the Krathong. You can hold the pole letting it drop gently below the water and your very own Krathong will float into the distance. Tradition claims for good luck that you must watch your Krathong until it disappears out of sight. It is also traditional to pray to wash away sins and bring luck for the following year. There is a belief that the longer the candle is burning, the better the next year will be.

While prestigious entities such as the Oriental Hotel produce amazing contributions to Loy Krathong, other companies and even teams from individual offices will also make their own larger Krathongs to float along the Chao Phraya River, also known as the River of Kings. This river is the very lifeblood of the city transporting people and goods as well as carrying Krathongs to pay homage to the gods and wash away sins. Under the full moon the river is especially spectacular with floats of exotic flowers and flickering candles travelling with it on its journey towards the sea.

The History of Loy Krathong 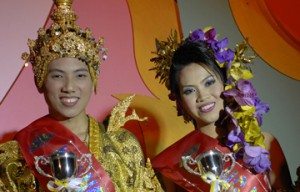 You might wonder why beauty contests form part of the Loy Krathong celebrations. The answer takes us back 700 years to the reign of King Phra Ruang. An intellectual woman of legendary beauty had just become one of the King’s ladies in waiting. Her name was Nang Noppamas and, after being in her new position for only five days, she prepared a sophisticated lantern in the form of a lotus flower with candles and birds carved from fresh exotic fruits.

The king was thrilled and ordered from that day forward a celebration of the full moon of the twelfth lunar month of every year. The celebration would be marked by floating lotus shaped lanterns down the river to pay homage to the Goddess of Water, Phra Mae Khongkha. Officials and ladies of the court soon had their own select competitions for the best lantern decorated with flowers and candles. However, the royal consort Nang Noppamas is still considered to be the very first lady to have floated a Krathong and therefore, in homage to her beauty and charm many beauty pageants or “Noppamas contests” take place during the festival. This legend, though widely accepted in Thailand, is disputed by some. There are claims that the festival originated in India, as there are similarities to the Deepavali “Festival of Light”. Whatever its origins, this is a festival not to be missed.

Other venues in Thailand to celebrate Loy Krathong

Loy Krathong is celebrated throughout the country; however the main venues outside the capital are:

Chaing Mai in Northern Thailand, situated in the foothills of the Himalayas. In the small town of Mae Jo they celebrate with thousands of small hot air balloons/lanterns floating into the air, the hot air lanterns are known as “Khom Loy”. Is where the festival originated in North central Thailand.

Tak, is the north Western province on the border of Myanmar (Burma). In Tak they traditionally make a coconut snack called “Maing” and hence they have a lots of coconut shells left over. The shells float easily and are used instead of banana leaves as the Kathrong base; they can be filled with flowers, candles and incense or filled with oil and lit to make attractive glistening floating lights along the Ping River.

Where ever you are in Thailand head for the waterways. Loy Krathong is one of the highlights of the Thai festive calendar and it’s worth booking your hotel and flights well in advance. This is a visual feast, a truly unique festival and an unforgettable experience.