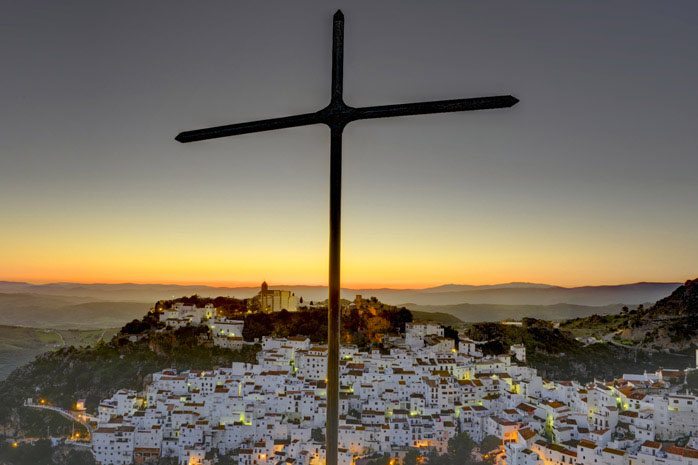 The white hilltop village of Casares, situated just inland from Estepona on the coast, in the province of Malaga, is one of the most beautiful pueblo blancos in the whole of Andalucia, and probably Spain too.

Overlooked by its Moorish castle, which stands proud on the hillside, the other major landmark is the prominently-positioned, simple cross on the top of the hill – a discreet but visible symbol of Christianity. The village was shot at sunset, with the cross adding an air of other-worldliness to an already mystical scene.

The higgledy-piggledy rows of flat-rooved, box-like houses almost look like they’re made of children’s building bricks, although they are more commonly compared to sugar cubes.

The village dates from Roman times – you can bathe in the natural sulphur pools, and the Roman town of Lacipo – and was the birthplace of Andalucia’s founding father, Blas Infante. He championed the region’s autonomy in the 1920s and 1930s, and wrote the words to the Hmyn of Andalucia. You can visit his house, which is now a museum.