Michelle Chaplow has just photographed the Minzah hotel In Tangiers for “Famous hotels of the World”. The Minza hotel was constructed by John Crichton-Stuart, the fourth Marquis of Bute. The architectural influences of the hotel stem from Hispanic- Moorish building styles. The Minzah was built in 1930 and at the height of its fame was claimed to be the most luxurious five Star hotel in Morocco. Its unique location with spectacular views across the straits from Africa to Spain and Gibraltar makes it very interesting geographically; the straits divide the two continents and Tangier ;provides a gateway from Europe to Africa. Famous guests at the hotel include King Juan Carlos of Spain, Prime Ministers such as Sir Winston Churchill and Hollywood stars such as Rita Heyworth, Rock Hudson, Erol Flynn, Anthony Quinn and Micheal Pallin. The hotel is renowned for its Bohemian international flavour, attracting dignitaries, artists and spies.

Michelle Chaplow recently carried out a stock photography assignment in Marrakesh, Morocco. Marrakesh is changing fast as new low cost airlines fly in from Paris, London and Barcelona. It’s a unique, exotic destination and specific parts, such as the Medina, look like they haven’t changed for centuries. A traditional riad was hired in the very heart of the Medina, a photographers paradise. Even the gas bottles arrived by donkey or bicycle, at best, with no infrastructure for cars here. In terms of photography, Michelle loves the way they use colour in Morocco. While we are almost afraid of colour in Europe, here they combine the most unusual shades with complete success. Michelle concentrated on the details and the essence of the colours in this exotic African city, Marrakesh. 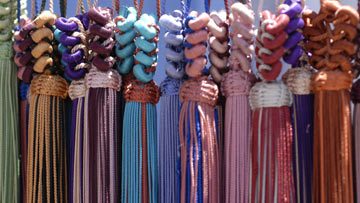 The gardens of Majorelle are a complete contrast to the hustle and bustle of Marrakesh. The French painter and plant collector Jacques Majorelle (1888-1962) settled in Marrakech in 1923 and created a subtropical garden which he opened to the public in 1947. Yves St Laurent and Pierre Bergé established a trust in 1980 to ensure that the Majorelle gardens would always be open to the public.

It’s no wonder the famous Parisian fashion designer’s last wishes were to have his ashes scattered among this tropical oasis of calm. The gardens were a true refuge from the opulent world of fashion and his celebrity status. Apart from blue plumbagos and the odd violet bougainvillea, these gardens are an homage to green. In photography green is the most difficult colour to capture. However, there are so many shades of green here, it’s almost like a mystical emerald rainbow. This is a living work of art, right down to the cobalt blue fountain and the trendy graffiti on the bamboo. May Yves St Laurent rest in peace in his emerald paradise.

The five star Sacher hotel in Vienna, Austria has been added to Michelle Chaplow’s “Favourite Hotels in the World” section. The Sacher hotel itself was founded in 1876 and is a member of “The Most Famous Hotels in The World”. The Sacher is famous for its original Sachertorte, a chocolate cake, invented by Franz Sacher in 1832, and even today the secret recipe is carefully guarded in the hotel’s vaults.

Anna Sacher, the socialite, cigar smoking, daughter-in-law of the founder, ran the hotel from 1892 until her death in 1930. The Sacher became infamous among the rich and noble. Anna Sacher collected autographs of famous guests that stayed at the hotel. The tradition carries on even today and signatures are embroidered onto a tablecloth that now hangs in a glass show case within the hotel. Aparently they are now working on tablecloth number six. Famous guests of the hotel include the Duke and Dutchess of Windsor, Andrea Bocelli, Montserrat Caballé, Elizabeth Taylor, Princess Caroline of Monaco, Hillary Clinton and the Dalai Lama. If you’re in Vienna, this is indeed the place to stay. 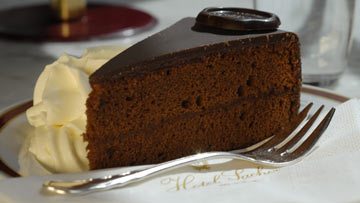