September 2012: A month in Thailand 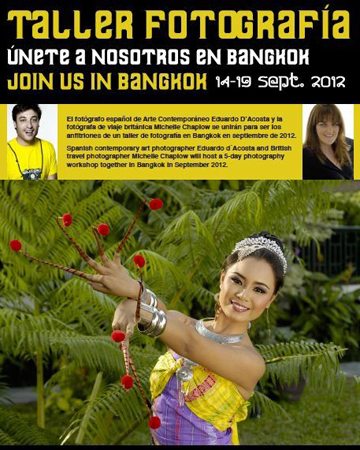 One of the thrills of this trip was that all the students and Eduardo d´Acosta, the guest speaker and photo expert, were seeing Bangkok for the very first time – a privilege for Michelle to share this world with the group.

The tour resided for one week at the five star Shangri-La hotel, perfectly located on the banks of the Chao Phraya, the main artery of the city which lets the life blood of the city flow 24/7. The elevated position of the incredibly comfortable rooms, and the use of the Horizon Club conference room and dining facilities, really added to the trip. 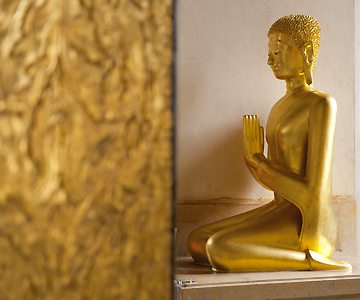 Day one included a tuk-tuk tour of the city, stopping at two temples including Wat Pho Temple of the Reclining Buddha. This temple has magnificent architecture, and adjacent to the Reclining Buddha you can see a small raised garden, the highlight being a Bodhi tree which is propagated from the original tree in India where Buddha sat while awaiting enlightenment. The colours the traffic, chaos and order with a peaceful Buddhist touch – a great introduction to the vibrant Thai capital.

The afternoon programme included a photo shoot at the Thiptara resturant at the prestigious Peninsula Hotel. Built in a classical architectural style from Northern Thailand, it serves delicious Thai home-style cooking. The group concentrated on photographing the upper lounge, where pre-dinner drinks are served on a mezzanine level, with floor-level seating on huge comfy cushions accompanied by Thai melodies and the gentle notes of windchimes. 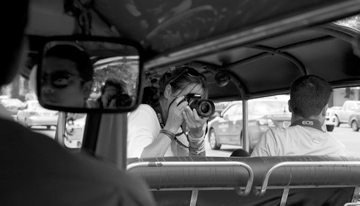 Afterwards, the group returned to hotel where each evening complimentary early evening cocktails were served from 17:30 to 19:30 hours in the Club Lounge.

On day two the group visited the former capital of Thailand, Ayutthaya, with its temples and religious monuments. Ayutthaya is 90km north of Bangkok and is a UNESCO World Heritage site located in the valley of the Chao Phraya River. 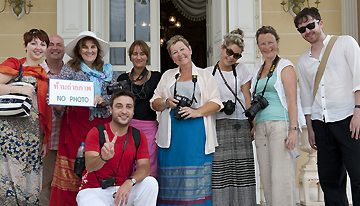 En route the group photographed the magnificent Bang Pa-In Summer Palace, a former royal residence built in 1632, with various stages of reformation and additions during the subsequent centuries up to the present day. A well-travelled Thai royal family, many of whom studied abroad, brought back with them new ideas which are reflected in the European-style architecture mixed with Thai and Chinese influences. A perfect stroll, camera in hand to capture architecture, flowers and reflections in the lake. This is a place which makes you forget that time exists, with the camera leading the way.

Many of the group had never seen rice growing before, and they were treated to a stop by a padi field, just ripe for harvesting, lotus fields and the joys of watching the local children happily playing in the river.

Day three started with a lecture on Contemporary Art Photography by Eduardo D’Acosta, who concentrated on the great contemporary photographers that have focused on Asia. Eduardo particularly concentrated on tips and technique for portraiture, and later that day the group ventured into Chinatown to put the theory into practice, capturing local faces on a medium-format analogue camera. Street photography, where the group was led by the location and the spontaneity of people, so perfect for capturing on camera. We travelled through narrow alleys, past market stalls and back street restaurants, savouring the true flavour of Bangkok.

The afternoon was dedicated to portraiture, this time back in the hotel, photographing chefs and hotel staff in traditional Thai attire.

In the evening, a “closed door” photo shoot at The famous Q bar Bangkok, widely regarded as Bangkok’s premiere nightlife institution, as featured in Elle, Vogue, Time, Esquire and Newsweek to name just a few.

Here the group concentrated on Silhouettes with the vibrant contrasting interior decor.

On day four, the group had free time to discover Bangkok at leisure through the lens and eyes of the camera.
Day five there was a trip the floating market of Damnoen Saduak, 80km south-west of Bangkok in Ratchaburi province.
On the way to the market, the group stopped at a coconut farm, where they had a Martin Parr-style image shot and reproduced on a plate as a souvenir of the trip. A small canoe took the group along narrow tributaries to the Thai market, where they were able to capture Thai river houses and the spirit houses alongside the river from the perspective of a low-down reportage angle.

Then elephant-trekking – so good to see the world from the top of an elephant, and what a photo opportunity! Afterwards, on to the Rose Garden Cultural Centre to experience first-hand, and photograph, a festival of Thai culture and dance.

Day six saw a visit to the Grand Palace in Bangkok, the official residence of the Kings of Siam, and later Thailand, since 1782. Situated in the very heart of Bangkok, this spectacular building has golden domes and spires, ornately carved statues, saffron-clad Buddhist monks, lush green vegetation and breathtaking architecture: just spectacular for photography.

In the afternoon we left from the Shangri-La hotel pier and boarded a longtail boat to cross the river of kings and entered into the tributaries of the Chao Phraya River. The perfect way to see Thai family life on stilt houses along the river: an impressive sight for indeed for any photographer.

This was followed by a final day celebration, with a champagne reception and evening out in this amazing capital.
Over the next few weeks a link to individual students’ work will be posted on this site.

September 2012: Photo shoots for Hotel Essence at the Golden Triangle of Hotels in Bangkok (Mandarin Oriental, Peninsula and Shangri-La), Thailand

1. The Mandarin Oriental
Michelle carried out a photo shoot of this hotel’s spa plus portraits of the New GM Amanda Hyndman for The Most Famous Hotels in the World®
2. The Peninsula
Strategically placed on the Chao Praya river, at this hotel Michelle photographed the Peninsula pageboys, Asian and traditional afternoon tea, the

Thiptara resturant at dusk, champagne on the lawn and her signature speciality: the essence details, capturing the idiosyncrasies of this hotel, such as fruit carving and their vast array of silver teapots – memorable hotel moments.

3. The Shangri-la
Even though Michelle hosted a photo workshop here, there was still time to capture the odd idiosyncrasy of this wonderful hotel, an ideal base for travellers on business and leisure.
All transfers were made by boat, adding the even more magic to the trip.

As a regular visitor to Koh Samui, a luxury hotel addict’s paradise, Michelle selected this hotel for some family and rest time, mixed in with a two-day shoot, capturing both details and specific areas where the marketing department felt that they required more shots, such as the hotel gym, the library and meeting area, and the pool. Michelle couldn’t resist the close-up essence details of the frangipanis, the Zen spa entrance and much much more. The final selection of images will be posted soon on Hotel Essence photography.

After a memorable trip to Thailand, Michelle returned to Spain just in time for her birthday celebrations on 27 September. 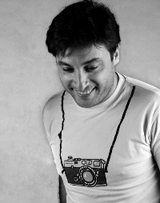