After a very enoyable and rewarding year of luxury hotel photo shoots, working on location in Europe, Asia, Africa and America during 2013, photographer Michelle Chaplow and her Hotel Essence crew would like to wish you all a wonderful 2014. 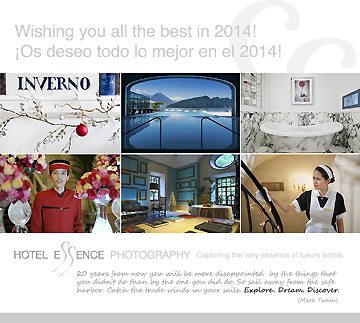 This is Michelle´s favourite Heathrow Airport hotel, with views right onto the runway 09L/27R from the rooms, no better place to start the year. The hotel is directly connected to Terminal Five, so travelling from here is a breeze.

This year started in style with a trip to the glamorous destination of Monaco for the opening ceremony of a new Nobu restaurant at The Fairmont Hotel Monte Carlo, Monaco. The evening was truly star-studded, with Robert de Niro, Prince Albert and Princesses Charlene all helping world-renowned chef Nobuyuki “Nobu” Matsuhisha inaugurate his new restaurant, the 27th Nobu worldwide. Read more about it here.

Michelle delivered a two-hour talk entitled “La Fotografia Contada” on the importance of photography for luxury hotels around the world, at the Colectivo Imagen photography society in Fuengirola. Having lived in Andalucía for the last 20 years, she chose Andalucía as her specific destination.

Michelle was delighted to see many friendly faces in the audience from the Malaga CAC – colleagues such as Marcos G Meider, Fredy Torra, Juan Zotano, Pedro Torrecillas Cabrera, Eva Casal, and Eduardo D’Acosta. It was a great opportunity to discuss destination photography and share experiences of photographing luxury hotels around the world.

After imparting humorous anecdotes and tips on creating top-quality imagery for luxury hotels, both in the creation and post-production processes, there was a brief Q&A session where Michelle was able to share some of her favourite luxury hotel images with the crowd of photography enthusiasts. The keynote speech was a success and she is grateful to Colectivo Imagen and, in particular, David Villalba Diaz and Jose Gallardo for organising this event. This photography society has just celebrated its 30th anniversary, and is one of the very oldest in Spain.

Michelle felt really honoured that almost 100 people attended the event; there weren´t even enough chairs in the room. Michelle was presented with a bottle of wine and a signed photographic print by Eva Casal, which she will treasure.

This hotel is absolutely unique, with each of the 12 floors designed by a different architect or designer. The whole project included 19 of these top talents, with stellar names such as Zaha Hadid, Norman Foster, David Chipperfield, Victorio&Lucchino, Marc Newson, John Pawson, Ron Arad, Arata Isozaki, Jean Nouvel, Teresa Sapey, and Scottish designer Kathryn Findlay. Sadly, Kathryn passed away from a brain tumour on 10 January 2014, aged 60; she co-designed the Orbit Tower in the London Olympic Park with Anish Kapoor.

The Guardian newspaper reported: “The news of Findlay’s death came as the Architects’ Journal awarded her the Jane Drew Prize “for her outstanding contribution to the status of women in architecture”. “She was one of the most talented people in British architecture,” said Eva Jiricna, one of the jurors. “I hope her work will be discovered by a new generation.”

Works of art and design long outlive their creators and Michelle spent a weekend on the very floor that Kathryn created. After experiencing the curvaceous feminine lines, the influences of Japanese minimalism (Japan was her home for many years), Michelle commented of Kathryn’s design, “She created a space to dream, to add your own colour; a relaxing ambience, where you can watch the clouds. The room has a spaceship, almost ocean-like feel to it – to know this feeling first-hand you need to spend a night in one of her spaces”. An architectural genius.

Sebastiao Salgado is the one of the greatest black and white photographers of all time. Born in Brazil, he is especially well-known for his social documentary photography, and has worked in lands almost untouched by the first world. He has photographed remote tribes in the Amazon and villages in Africa; the Galápagos, Madagascar, and Indonesia, to name a few. The photographs in this exhibition – Genesis was an eight-year project where Salgado visited 32 countries – are a mixture of portraits and unforgettable landscapes. The prints are enormous, and the quality is absolutely superb with extraordinary detail, as always in his work. For anyone visiting Madrid before 4 May, this exhibition is unmissable.