Michelle Chaplow shares e a selection of her favorite travel images from 2008.
Clockwise: Spanish flamenco dancer; Three monks in saffron clad robes visiting the Grand Palace of Bangkok, Thailand; The luxurious Oberoi hotel in Mauritius; Details from the spice souk, nestled in the Marrakesh Medina, Morocco. Michelle is looking forward to an exciting New Year of travel imagery and wishes you the very best in 2009.

Michelle has returned from a recent stock shoot in Perth, Western Australia (WA). Perth claims to be the most isolated city in the world. The closet city to Perth with a population over 1 million is Adelaide in South Australia, which is 2,104 km away. Perth is geographically closer to Singapore, Jakarta and Indonesia, than it is to Sydney.

The Swan river runs through Perth, home to the famous Black Swan (also the title of a recent best selling book by Nassim Nicholas Taleb). Western Australia has picture postcard beaches, surf culture, varied landscapes. The region is also famous for its award winning wineries (particularly in the area around Margaret river), abundant wildlife, including the national emblem, the kangaroo. There are plenty of subjects to keep a photographer happy! 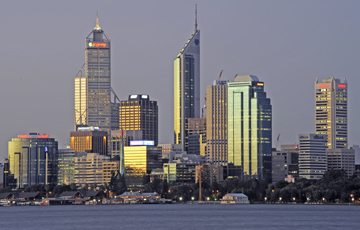 The Perth skyline and the famous Swan River.

Michelle has been commissioned to carry out a 10 day shoot for a five star hotel in Kiev. She will fly to Kiev with her photographic assistant Joaquin and commence the project mid-January.