The jewel in the Valencian crown has to be the Science Park – so much symmetry, the beautiful Mediterranean shades of blue and white; it’s a perfect venue for photography. 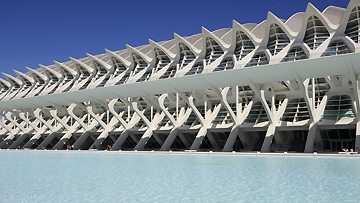 The old historic quarter, with its emblematic cathedral, the gothic belltower, “El Miguelete”, and the Plaza de la Virgen, are all good subjects to capture on camera. In 2007 Michelle received an international nomination for an architectural night-time shot of La Ciudad de las Artes y las Ciencias.

Symmetry in the science park

It was an interesting contrast to photograph the Science Park again, this time in natural light. In travel photography, images come to life with local people in shot, especially if you are in Valencia and they’re wearing traditional Valencian dress. On this occasion, Michelle met a model wearing traditional dress who was willing to pose for a selection of shots. There are so many variables in a photographer’s day: the light, the orientation, positioning, accessibility; however sometimes a photographer can be lucky enough to find themself in the right place at the perfect time. 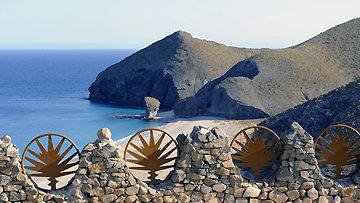 Michelle returned to Almeria for the first time in over a decade and was delighted to report that, in terms of the environment, nothing much has changed. The natural sea-carved monuments on the coastline, and the stunning outcrop of Torre del Pirulico in Mojacar, were not only intact, but the Moorish tower has been lovingly restored. The agricultural fields of Pulpí are striking – this is the land of lettuce; the town holds the Guinness World Record for tossing the world’s largest salad (6,700 kilos). Remote beach towns such as Agua Amarga have literally just a few hundred inhabitants, yet sell designer bikinis from Sydney and California. The impeccable, newly-revamped old town and fortress of Carboneras, and the world-renowned, geographically fascinating, isolated “dead-straight” beach of Playa de los Muertos, all provided interesting subjects for a photographic reportage. 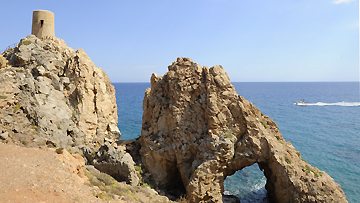 The Spanish version of Andalucia.com (www.esp.andalucia.com) recently featured the historic town of Santa Fe in Granada province, and needed new images to illustrate the article. This photographic assignment presented a perfect example of the reality of a photographer’s day-to-day life. Santa Fé is steeped in history, but this same historic quarter is a nightmare driving a 4×4 full of camera gear. Michelle arrived about one hour before sunset and drove around the town quickly with her assistant to orientate herself. 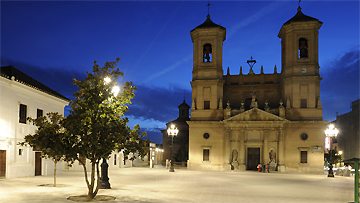 Working against the clock, Michelle quickly spotted a hotel with a roof terrace, ideal for a sunset shot of the Spanish rooftops and towers. First of all permission was needed from the receptionist, then the shot was done, showing rose-tinged clouds in a dusk sky. For the second photograph, it was down to the Puerta de Granada, where the pink evening sun reflected on the cobblestones. By a miracle, a boy rode through the archway on a bike, giving a much more authentic feel to the image, and also providing necessary scale. Finally, as the time ticked away, and before the sun disappeared all together, Michelle managed to capture an image of the Plaza de Espana with the famous Iglesia de la Encarnacion. She had to complete the assignment in the narrow time-slot between sunset and when the sky blackened completely, making quality photography impossible.

Three horizontal images were required for the brief, and three images shot in one hour.

Michelle attended Domaining III Spain and the headline stars were The Castillo Brothers. Pioneers in commercial websites they gave the attendees a most inspiring motivational talk on how to increase your web revenue.