It was such an honour to be asked to speak at TEDx. 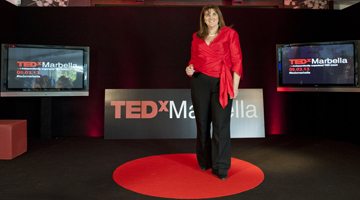 When I stepped off the stage in New Delhi after my Keynote Speech at the Preferred Hotels Group Annual Conference last October, I thought, what next? My answer was TEDx. Four months later my dream came true: I was invited to join the TEDx community of speakers. My big day to speak in Marbella was 8 March.

I spoke on the Importance of Photography for Luxury Hotels and Destinations and choose Andalucia as my focus. It’s a very satisfying thing to do and I would recommend it to anyone who wants to vocalize an idea, offer a taste of their passion. Plus you get to speak alongside some truly inspirational people. It’s a challenge and I felt honoured to have been invited and humbled by the positive feedback. Sometimes in your career you want to give thanks and TEDx is certainly a platform to share and share your thoughts.

On the way to Madrid by train, inspired by photographer Nan Goldin, I took some self-portraits. I then joined them with music, depicting the self-image through reflection, travel, distance landscape, and the passage of time.

I was selected to serve on a panel for the ICANN Meeting Strategy Working Group. The MSWG was created to discuss and propose strategy for the structure, purpose and locations for ICANN Public Meetings and conferences starting in 2015.
When visiting the capital it’s sensible use the opportunity to do admin tasks, so I organized my Visa for a forthcoming trip to Beijing.

March 2013 Andalucia.com Survey on the Top Ten foods from Andalucia

With food photography high on the agenda again, I shot some products in the studio to illustrate a feature on Spain´s most visited English-language tourist website, Andalucia.com, including Spanish tortilla, paella, salmorejo and jamon serrano. See the full list here.

Nature has a mind of its own – this hotel is situated in Plasencia very near to the Valle del Jerte, which is famous for its cherry trees. The Queen of Spain was featured in Hello a few years ago surrounded by cherry trees in blossom, many thousands of them. I travelled overland from Madrid to Plasencia to capture the scene which normally happens at the end of March or the beginning of April. But nature can be unpredictable, and this year the season was delayed because the cherry blossom did not come out – even the annual Cherry Festival – Fiesta del Cerezo en Flor – was delayed. From those many thousands of trees, I literally saw just three in bloom, but that is how photography and nature goes; next year, in 2014, I have it in my diary to return. All was not lost, as I did capture some close-ups of the three lone trees and was able to carry out a little cherry-related food photography with chef Ramon Caso.

March 2013 Visit to the head office of the Paradors, Madrid, Spain

As an official photographer for the Spanish Paradors (the state-run group of hotels in outstanding locations, often in historic buildings), I was invited to their HQ for a briefing on my first photo shoot, which as scheduled to take place in July 2013. Like any corporate organization, the Paradors have their guidelines for photography and I met with the Director of Marketing Alicia Hernandez to go through these.

Many of the Paradors are in converted castles, monasteries, convents and other buildings with fascinating historic backgrounds. Andreas Augustin, President of The Most Famous Hotels in the World ®, tells us that “luxury can be bought, but history must be earned”. The Paradors have this as their trump card.

In July 2013 the Paradors will open a new hotel, the 43-room Parador de Corias in Asturias. The Parador de Corias is located in a spectacular monastery founded in 1032 and occupied by Benedictine monks. In the 12th and 13th centuries, the monastery reached its greatest height, at one point owning land in most of western Asturias and even the neighbouring province of León.

The Parador is located entirely within the monastery building. The basement contains archaeological remains of the earlier structure and the area has been turned into an exhibition space for guests’ enjoyment. The windows of its comfortable guest rooms, with wood floors and quirky furniture, offer superb views of Asturian countryside.

This magnificent building has been declared a national historic/artistic monument. The plan is an 8000m2 rectangle that includes two courtyards. A glassed-in cloister with arched ceiling surrounds the main courtyard and the entire façade is faced with marble from the town of Rengos. The spacious Tuscan-style church features a large baroque altarpiece, with two bas-reliefs depicting scenes from the founding of the monastery.
The building’s interior has a marked monastic quality, but with a contemporary feel, especially the large restaurant, café and guest lounge, with vaulted ceiling. There is also a leisure pool and hydrotherapy pool, treatment rooms and a gym.

The Parador offers open-plan function rooms for conference tourism, banquets, presentations and other uses, with audiovisual resources. These function rooms can be used in combination with the outdoor terraces and the two courtyards. In short, the Parador in Corias Monastery will set the standard for tourism and gastronomy in the region, as both a tourist location and a venue for celebrations and events, underscored by its significant historical value.

To be honest, after all this talking, I couldn´t wait to actually go there and start this photo assignment.